One thing that needs improvement is the reading comments there. At times it happens that the first comment develops into a huge thread, and then the second top-level comment (which might also be well worth reading) disappears somewhere down into the page. 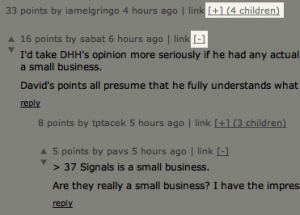 Reddit has combatted this common problem by making threads easily collapsible. I think it is worth having this also on Hacker News, so I implemented it and wrapped it into a bookmarklet so that you can use this functionality on-demand at Hacker News.

Drag this to your bookmarks bar: collapsible threads

As soon as it is available in your bookmarks bar, go to Hacker News and click on it when viewing a comments page. Next to each thread a symbol [+] will appear. Click it to collapse the thread and it will change to a [-]. Click that to expand the thread again.

The Hacker News HTML source code seems quite fragile in the sense that the comments section of a page can’t be identified in a really unique way (for example it does not have an HTML id attribute), so it might break when the layout of the page changes. This is why the bookmarklet is actually only a loader for the script on my server. I have tuned the HTTP headers in a way that your browser should properly cache the script so that the speed of my server should not affect the loading of the bookmarklet.

If you use Hackernews on another URL than news.ycombinator.com or hackerne.ws, use this bookmarklet: collapsible threads (no domain check)

Update March 18, 2011: Paul Biggar has contributed a greasemonkey script that also works on Firefox 4. I have adapted it so that it also works (which basically involved copying the jQuery script above mine) in Safari and Chrome (using NinjaKit).

Update November 22, 2011: Eemeli Aro has sent me a little CSS tweak so that the lines don’t move around when collapsing. The code downloadable from above contains his code. Thank you!

This site uses Akismet to reduce spam. Learn how your comment data is processed.